Eva Sturm-Gross (she/they) is a third year Studio Art major at Oberlin College, and the co-chair of Yeo-Press. Originally from Vermont, Eva grew up with two artist parents, which greatly shaped their appreciation of images at a young age. Eva’s mother, Rachel Gross, is a printmaker who focuses on a process called intaglio: an intricate exercise involving metal carving plates and acid. Eva’s father, James Sturm, is a well-known comic author who helped found a 2 year graduate school called The Center for Cartoon Studies near their home in White River Junction, Vermont. With such active artistic parents, Eva recalls creating her first recognizable image of a fish when she was three years old. And she’s been making art ever since.

I sat down with Eva for a great conversation about her process. We spoke about her many inspirations, including religious themes/narratives, Judeo-Christian texts, and theology. Eva enlightened me on her love of stories and craft, and how she goes about communicating a message through her work.

What’s your medium of choice?

Eva: I work two-dimensionally; it makes me feel like I have more control over the world that I’m building. Recently, I’ve been experimenting with narrative in the form of comics, but usually printmaking has been pretty big for me. I do relief printmaking, which is a process where you carve into linoleum or wood, then ink that surface to create an image. I also do a little painting, and I love carving—I’ve made some puppets and some spoons. Right now, I’m making a book! Do you want to see it?

Yes! Tell me more about this book.

Eva: So usually I work with Kristina Paabus (a studio and visual art professor who specializes in printmaking at Oberlin) who’s the best, but this semester I’m taking this class with Nannette Yannuzzi called “Art As Social Practice” which is pretty open ended which is good because I still don’t know what art as social practice is or if I can even do it. Right now we’re doing a mapping project, and I’m putting some ideas into a book. I haven’t quite figured out what I’m mapping, but I think I might be navigating a relationship between different forces. The assignment is pretty open ended, you can really map anything.

What themes or images have you been thinking about lately in your work?

Eva: Right now I’ve been thinking a lot about lions. My next project is going to have some lions involved. There’s this really big late medieval kabbalist named Isaac Luria whose acronym in hebrew is Ari, which means lion. I had this dream where the Chabad family at Oberlin was a family of lions and Oberlin was a little settlement in a big meadow. I had this conversation with Rabbi Shlomo about lions, then he was hunting a horse through the settlement, and I noticed horses have been coming up as a connection to Aristotle.

And how do horses connect to Aristotle?

What other topics/themes/imagery does your art deal with?

Eva: I think I’d say God, in a really specific way. A lot of my art is about a relationship with God, with human divine and with God’s self. Gender is really tied in there. Text also becomes an important part. My way of exploring religion and God is through my own Jewish identity. And Judaism is very text heavy so text is always important. I think my work is very romantic, I explore God’s relationship to God’s self, which is erotic. The narrative of humanity to God and God to God’s self is like a love story. This is exemplified in the sacred text The Song of Songs which is an epic love poem that doesn’t reference God once but is also part of the Bible, so it inherently describes God.

Do you always work off a text or narrative?

Eva: Sometimes I have a story to go off of, usually there’s a feeling or huge cloud of ideas I want to communicate.

What’s the best and worst art class you’ve taken at Oberlin so far?

Eva: The best was my relief printmaking class my first year. It was awesome, it was more about learning the craft than the work produced. The worst was an intro to drawing class, I got bored and wanted to get past realism. I’m super down with realism, I just don’t think I need to be there right now.

What’s something you’ve learned about yourself as an artist?

Eva: I think beauty for the sake of beauty is underrated, the act of creating something beautiful. That’s why I struggle with conceptual art. I put a lot of thought and research into the pieces I make. I want to turn beautiful ideas into beautiful objects, to take the potential and make it actual. I’m still growing as an artist, who knows where I’ll even land! 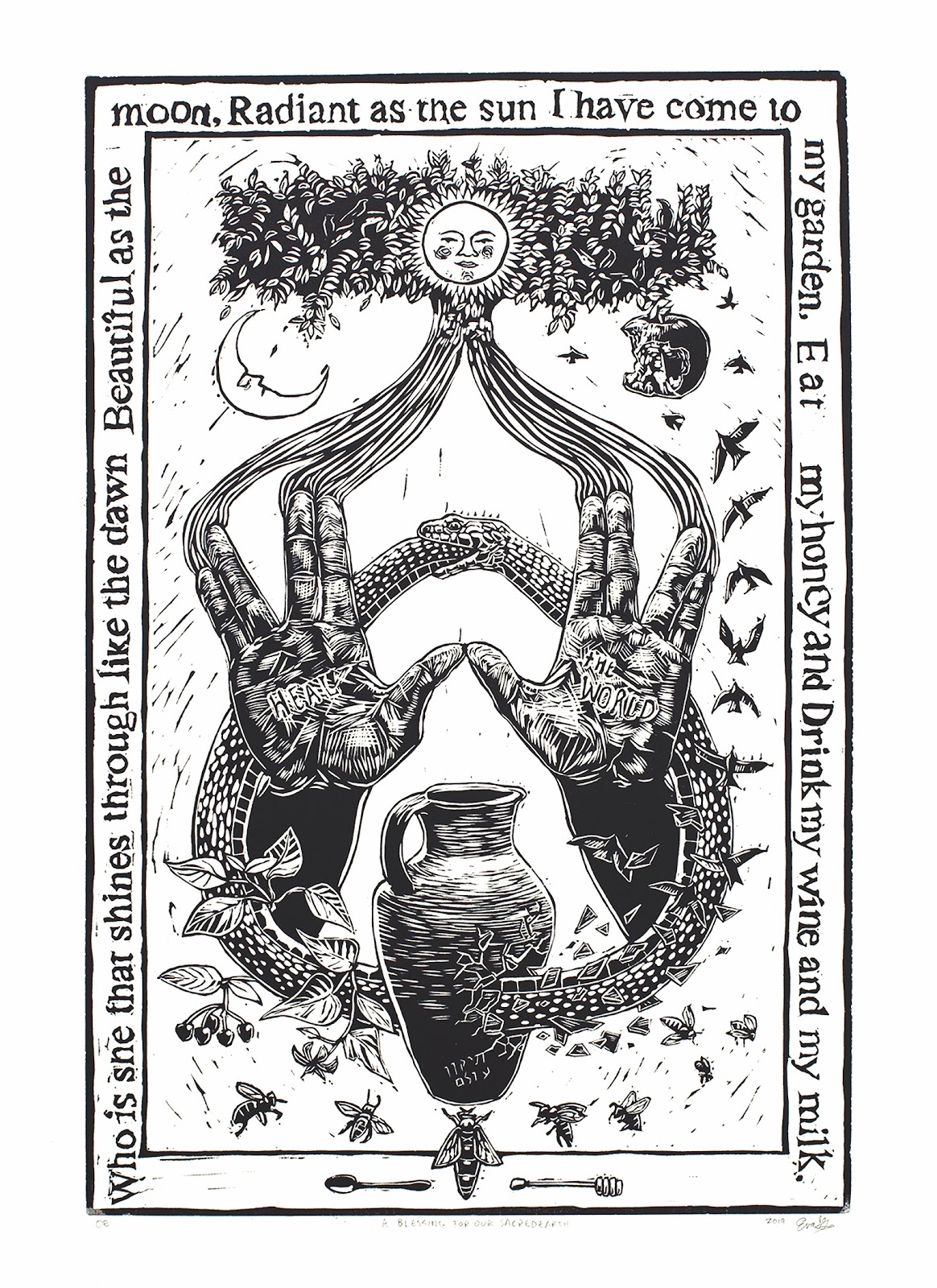 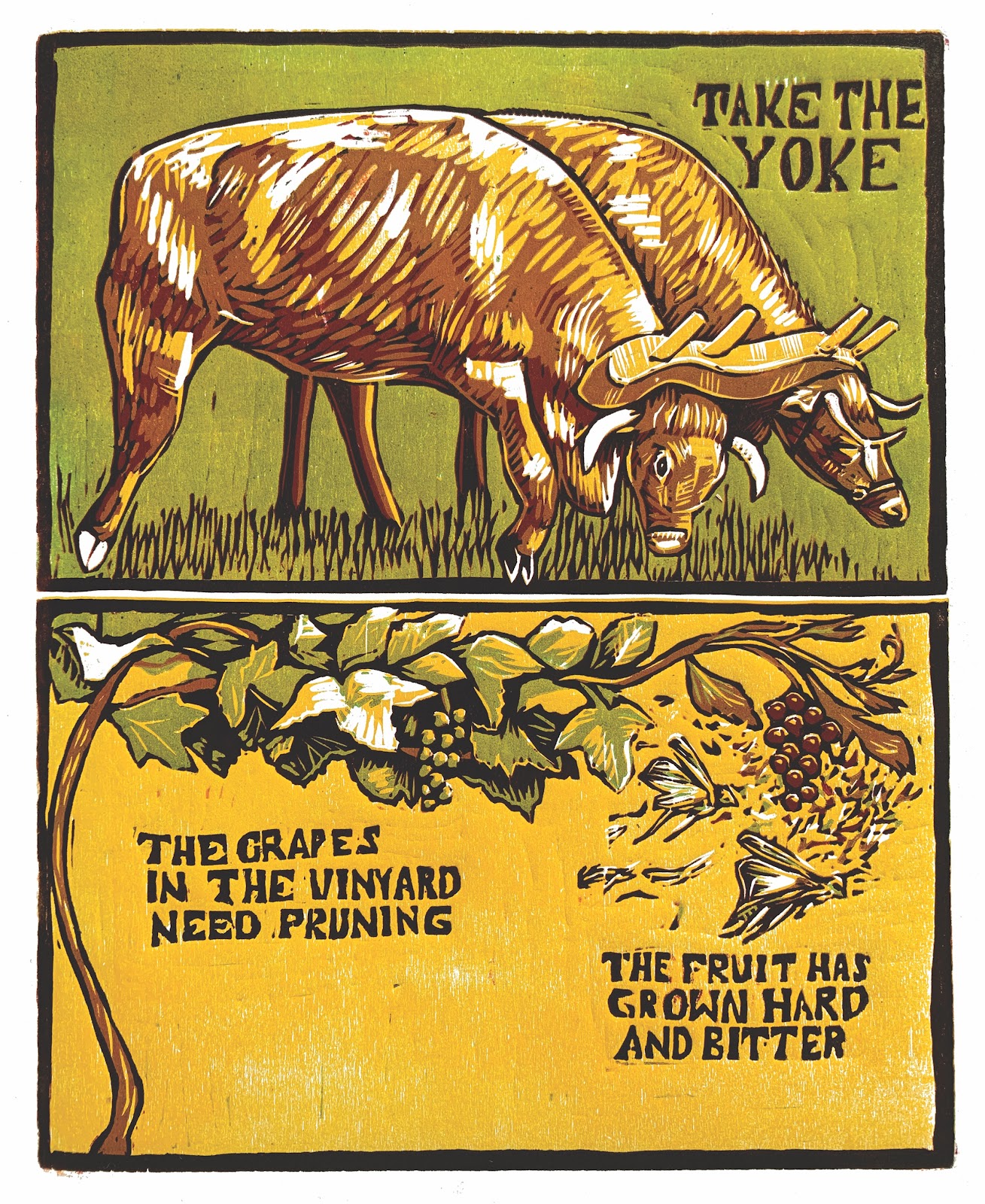