To have made it to the top of any one of the notoriously-cut-throat professions Eddie Henderson has had would require, one would think, a comparably cut-throat personality. And yet Eddie, who is one of the most prolific jazz trumpet players alive, who was the first Black person in history to compete in a U.S.  figure skating championship, and who was a practicing M.D.  for 10 years, is known around Oberlin for his relentless cheerfulness and warmth. On a typical pre-COVID evening Eddie could be found listening in on an impromptu jam session in Kohl, grabbing dinner at Lupita’s during Marg Night hours, or taking a stroll around Tappan.

Eddie does not use Spotify–he has asked me a couple times, in fact, to explain how it works to him, listening with only vague interest (for reference, “After You’ve Gone”  from his 2019 album has over 13 million plays  on Spotify).  He avoids technology whenever possible; he has an email address, but prefers to do most of his scheduling from his flip phone.

I have been lucky enough to study with Eddie for the last 3 years at Oberlin. Out of all of his students, I am probably the least likely to become a jazz musician by a considerable margin, but I have kept up with the practice regiment he asks of all his students because it gives me an excuse to spend an hour with him each week. I have spent 3 years attempting, each Wednesday, to steer our agenda away from trumpet-playing and instead coax as many life stories out of him as  can.  I finally asked if he would be willing to do a more formal interview so I could try to write down a few of the incredible tangents that always catch me so off guard.

Eddie grew up surrounded by music. His father was in the singing group Billy Williams and the Charioteers, which was the top Black singing group in the US. His mother, Vivian Brown, was a professional singer and dancer at the original Cotton Club. Her roommate in Harlem was Billie Holiday, and her two best friends were Sarah Vaughan and Nora Horne. When Eddie was 9, his mother took him to see Louis Armstrong, who, after the show, gave him his first Trumpet lesson backstage.

“I thought these were all just average people,” Eddie said in 2017 student documentary on his life. “I had no idea the stature they held.”

When Eddie was a senior in high school, Miles Davis, who was a family friend,  came to stay with his family for a week. “When I met Miles Davis at the end of my high school years, it was the first time I had ever heard Modern jazz, and I said What? I didn’t know you could do that with a horn.”

During that stay, Miles Davis had made fun of 17 year-old Eddie for having a playing style that imitated his own. It was another year before he visited the Hendersons again, but in that time Eddie practiced, and researched his hero extensively.

“I found out that his hero was a guy named Freddie Webster, sound and style and everything” Eddie said.  “So then the next time when Miles rang the doorbell, I was looking out the window because I knew he was coming—I was thinking, ooh, here he comes! And I opened the door. First thing he said to me was ‘You still trying to sound like me, Eddie?’ And I looked at him and said,  ‘You mean Freddie Webster?’”

Eddie burst out laughing.  “Point blank, Miles said, ‘Oh shit! I didn’t know you was hip to that.’ and then whispered in my ear ‘Everybody’s a thief—I just made a short term loan’.”

After finishing high school and one year of undergrad at UC Berkeley, Eddie put his education on hold to join the Air Force.  He was given an aptitude test, and they told him he had an aptitude for electronics. So at age 19, Eddie was assigned to be part of the bomb navigation team.

“You know the atom bomb is dropped from the B52,  there’s a computer that guides it. Well I learned if something went wrong with that computer how to fix that computer”

Eddie did 6 hours of training every day for a year, and wherever he had free time he would go down to the Denver Figure Skating Club and hit the ice.

“During that time I completely stopped playing the trumpet. I was just figure skating.”

Eddie had begun figure skating after his family Moved to San Francisco in August of 1954, a month before he was set to start out at a new high school.

“ I just had a whole month where I didn’t know anybody.  So I’m just sitting at home, bored, and my step father bought me a ticket to see the Ice Follies. For 30 days in a row, I sat and watched the ice show, just  mesmerized.”

Eddie, who had only finished one year of college before enlisting in the Air Force, faced heavy discrimination during his time in Denver.

“I was fanatical about figure skating. For a while, you know,  I thought that was my calling in life,” he said,, “ But they wouldn’t let me join the club there because I’m Black. Man that just pissed me off. I said I’m gonna be better than the people who did that to me.” 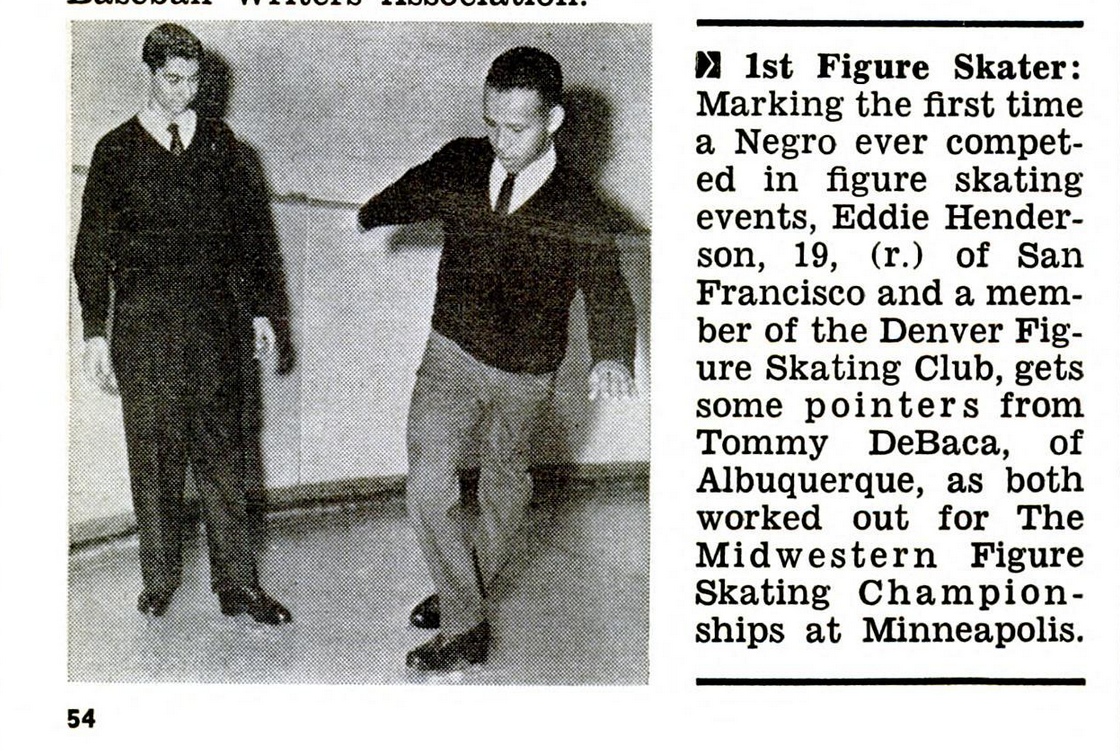 Pictured is a clipping from a 1960 issue of Jet Magazine. Henderson Became the first Black person in history to compete in a figure skating championship.

So many of the feats of Eddie’s career are made all the more remarkable knowing that he came into adulthood just as the Civil Rights Movement was gaining traction. At UC Berkeley, which had a student body of over 12,000, he was one of only 12 Black students.

“The reason I ultimately left the Air Force was that it was so racist–I said let me get out of here and go back to school and get an education. I had just finished one year of college before I (enlisted)” he said, “So even though I didn’t particularly want to be a doctor, I thought, okay, let me be a doctor.”

Perhaps as much as out of a desire to prove his military peers wrong, Eddie went to Medical school to make a point to his step-father, who was a doctor as well.

“He and I didn’t get along,” Eddie said with a laugh. “He was always talking about how doctors like him were a step away from God, and how I wasn’t smart enough to do it, and so forth…I think I finished Med school mostly to spite him.”

After finishing his undergrad at UC Berkeley, Eddie was accepted into Howard Medical School. Every day, once his 8am-5pm class schedule ended, he would go down the street to the  Conservatory to practice. In his first month of this routine Eddie developed a sort of rivalry with the staunchly anti-jazz Dean of the conservatory.

“A faculty member guy heard me trying to play jazz there and threw me out, and he said “That doesn’t sound like Bethoven or Bach to me. “

The man said he didn’t recognize Eddie in the music department, and Eddie explained that he was a student at the Medical School.

“He said ‘Well, I wouldn’t come down to the Medical School and try to operate on a patient’…I didn’t know he was the Dean at the time, so I said, ‘Well yeah, you wouldn’t be qualified to.’ That made him really mad. He threw me out and exiled me from the practice rooms.”

In the month following this exchange, the Conservatory Dean hired an armed guard to make sure that Jazz was not being played in the classical buildings (and particularly Jazz by Eddie).

“I guess the guard listened outside and heard me practicing,” Edddie said, “because he busted the door open, cocked the gun to my head, and said ‘No you’re swinging too hard, you got to get out of here.’ Can you imagine that? 1964.”

After completing Medical School, Eddie moved back to the Bay Area, where between 1970 and 1985, he practiced medicine part time and played gigs in the evenings. During this time he was in Herbie Hancock’s band for 3 years, and recorded his first 8 solo albums.

“About four hours a day. I worked at a small clinic.” Eddie said in a  _____.  “The head doctor knew I was into music and he hired me with the stipulation that whenever I get tours I can go and come as I please. They would even pay me when I was gone. It was lovely.”

Eddie actually did a Psychiatric Residency in addition to internal medicine, and was certified to practice, but he never did because internal medicine was a better fit for his music-centered lifestyle. The Psychiatric doctor/patient relationship is much more personal, and he did not want to need to leave a patient hanging if he needed to go on tour for a month.

“”Basically, I just wanted people to come in and say ‘ah’,” he said in a 1998 New York Times interview. “I didn’t have any time for head trips. Everybody in San Francisco knew I played music. People would come to my office and the nurse’s aid would say: ‘He’s in the back practicing. He’s got a gig tonight. Don’t bother him. If his chops aren’t right he’s unhappy.’”

Though Eddie’s life of extremes has been driven by a number of wildly varying factors—spite, boredom, curiosity,  annoyance—he has time and again come back to music.

“I think it was when I was in residency and driving 4 hours each direction to New York on the weekends to play gigs with Freddie Hubbard and Lee Morgan that I knew it was what I wanted.”

Way back in 1950, a year after Eddie’s first lesson with Louis Armstrong, he returned to the club. Armstrong asked if he had kept playing. Eddie pulled out his horn and played Flight of The Bumblebee (a notoriously difficult etude), which so impressed Armstrong that he gave 10 year old Eddie a book of his own solos. In the back, he wrote:

This is to warm your chops up by.